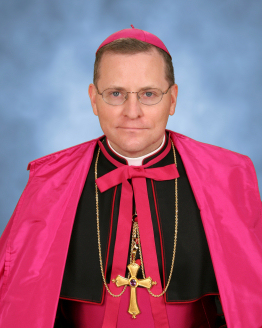 Robert L. Neville was born in Southampton, New York in 1972. In 1990, after graduating from high school, he entered St. Thomas Aquinas Seminary in Winona, Minnesota (operated by the Priestly Fraternity of St. Pius X, founded by Archbishop Marcel Lefebvre) where he spent the next six years studying for the priesthood. Upon completion of his studies, he was ordained to the priesthood by The Most Reverend Richard N. Williamson on June 22nd, 1996.

In August of 1996, Father Neville took his first and only assignment with the Priestly Fraternity of St. Pius X at St. Joseph Church in Richmond, Michigan. During the week, he taught Religion in the parish grade school and made Communion calls throughout the Metro Detroit area. Over the weekends, he traveled to Mancelona, Grand Rapids and Redford, Michigan, for the celebration of Sunday Mass. Throughout the first year of his priestly life, he gave serious consideration to the question of ecclesiastical authority and the exercise of his priestly apostolate without the approval of the hierarchy in communion with John Paul II.

By the autumn of 1997, Father Neville found that he could no longer in conscience exercise his priesthood under the auspices of the Priestly Fraternity of Saint Pius X. The ecclesiological position and attitude of the Fraternity, he concluded, was schismatic, since its actions (although objectively good) belied its disingenuous claims of loyalty and obedience to the man it supposedly regarded as the Roman Pontiff.

In December of 1997, Father Neville met with the superior general of the Priestly Fraternity of St. Pius X, The Most Reverend Bernard Fellay, to announce to him personally his departure from the Fraternity.

Over the next seven years, Father Neville worked alongside fellow sede-vacantist priests. During the week he taught Religion and Latin at Mary Help of Christians Academy in Warren, eventually serving as its principal. He also performed various pastoral duties at Our Lady Queen of Martyrs Church, first in Warren and later in Fraser, Michigan, including weekly devotions, confessions, convert instructions, marriage preparation classes, and Communion calls throughout the Metro Detroit area. He also served as confessor and spiritual director to the Dominican Sisters of the Immaculate Heart of Mary assigned to Warren. Over the weekends, he traveled to Columbus, Ohio, and to Milwaukee, Wisconsin, for the celebration of Sunday Mass in traditional chapels.